Sorry for the not awesome quality. Click for bigger. Reads from right to left. 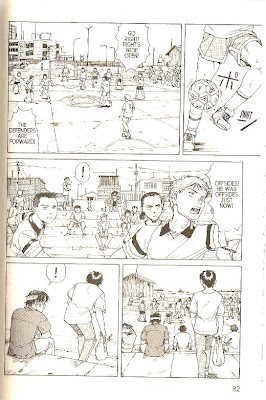 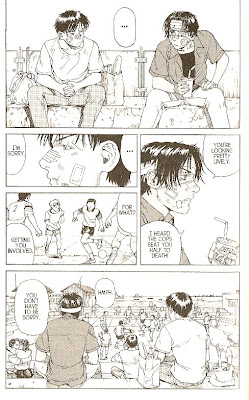 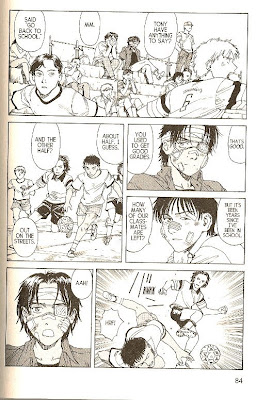 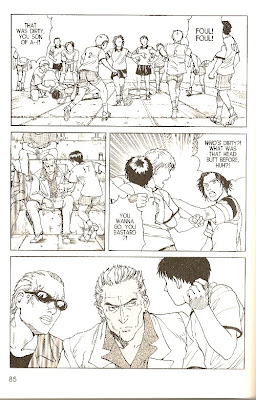 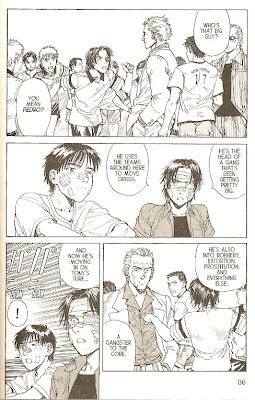 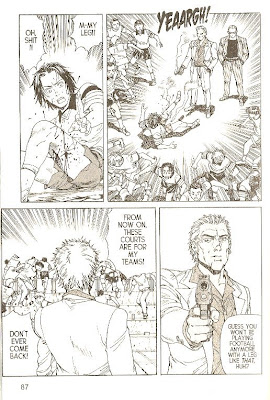 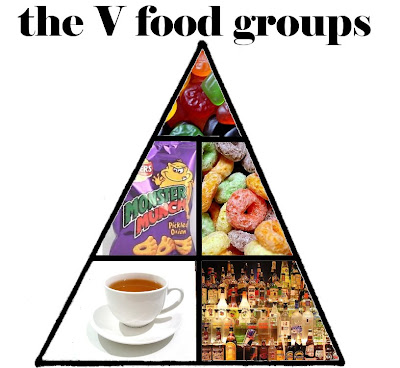 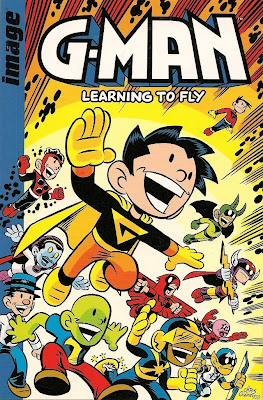 Chris Giarrusso is the creator of the Mini-Marvels comics that used to come out from Marvel. They were often the best part of the comics they were printed in and I remember just reading the Red/Blue/Green Hulk backups he drew in the current Red Hulk series.

Mavel, in all their brilliance, decided to stop publishing Mini-Marvel comics, in case they were confused with the not-nearly-as-good Super Hero Squad. Thanks Marvel.

Still, Giarrusso hasn't given up on creating awesome, funny superhero comics. Instead, he's returned to characters he created in the back pages of Savage Dragon.

G-Man (the G stands for G), and his friends, Billy Demon, Suntrooper, and others, fight crime! Well, sometimes. After school. Or at school. Maybe.

G-Man pokes fun at a lot of super hero tropes, but it's also obvious that Giarrusso really likes super hero comics, despite their occasional (or even frequent) stupidity. I'd say he even embraces the stupidity.

The heroes have to help a wizard find his golden chalice (it was in the sink). A Christmas tree comes alive, steals a car, and ends up working for Santa Claus ("Evergreen want to take responsibility for actions and make amends.").

As the comics were orignally backups we see Giarrusso using his limited space in a way you don't see that much in comics anymore. He packs panels into the pages. 16 per page is not uncommon, and 12 is more regular. There is lots of talking in this comic, but it's all good.

G-Man never fails to cheer me up, and I hope that the current mini series is successful enough for Giarrusso to continue making these comics. 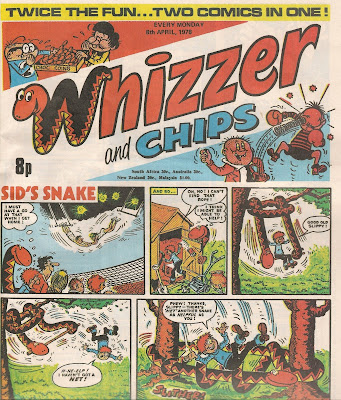 This is another of the free comics that the Guardian gave out to its readers, and it's far more like the ones I used to read (the Beano, the Dandy, the Topper, and the Beezer) when I was a little kid.

One of the neat things about this one is that it actually is two different comics combined into one. Whizzer has the front page, but inside you'll find another front page, this time for Chips, and instructions on how to take out the staples and have two different comics. The front and back pages of Chips are in full colour, like the front and back of Whizzer, and unlike the rest of the comics which are either in black and white or have a single colour. Chips even has its own joke page!

Some of the comics inside are kind of weird. Most of them are just your average one or two page humour comics that I remember, but then you get the more adventurey ones that had apparently been phased out by the time I started reading comics. "Whizz" Wheels is about a "super-cyclist" who in this issue saves a villainous land agent from a forest fire while riding a penny farthing. Seriously.

There's also "Thingumajig!" which features a rather odd looking alien who, of course, says things like "Gg-uu-uuuh...my head spins and stomach tubes churn! This must be what Earthlings call sickness of the sea!" Oh aliens!

My favourite comic in it is also the only one I've ever seen before (or at least I think I've seen it before): Harry's Haunted House. It's about a ghost who doesn't like haunting people, and I thought it was fairly funny. 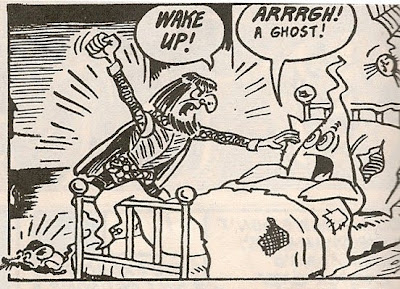 Or maybe I just really like the idea of a ghost sleeping in a bed.

Superman and Batman vs. Aliens and Predator

Superman and Batman vs. Aliens and Predator
Written by Mark Schultz. Art by Ariel Olivetti.

Fuck me, this was terrible. Just incredibly, incredibly bad in almost every way a comic can be.

Well, I suppose that is not true, here are ten ways in which it could have be worse:

1. It could have been drawn by many different artists with completely conflicting styles. Olivetti is far too reliant on digital painting or whatever, but his scenes in the Daily Planet office are pretty good.

2. It could have not featured any aliens of any sort at all (instead of barely featuring them) and just been about Batman and Superman exploring some empty caves.

3. Lois could have been killed along with every other non-superhero in Peru, causing Superman to have to travel back in time to save her.

4. Batman's costume could, somehow, have been stupider.

5. The badguy humans could somehow have been more vaguely defined (this one would be tough, as they didn't even have names, just an organization, I guess you'd have to not even name the organization.)

6. The Aliens could have been even less dangerous, and not even been able to damage Superman's costume.

7. Lois could have been completely useless, instead of saving Batman by having a "basic working knowledge of Kyptonian mechanics."

8. There could have been more tiny, annoying robots.

9. It could have had Aquaman in it. 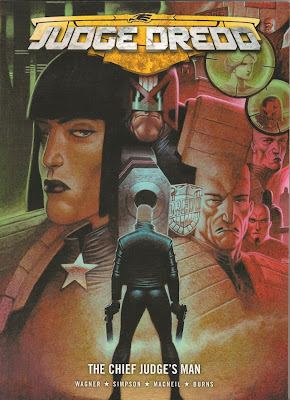 Last time I wrote about 2000ad I said I'd wait until the next "all part ones" issue. But you know what? Screw that. Because for slightly more than the price of the average issue of 2000ad (£1.80) I can just buy collections from bookshops that sell everything for £2. Awesome!

Of course, unfortunately I start with one of the least interesting Judge Dredd comics I've read. Most of what I've read has been in random American reprints, so I really don't remember what I actually have read. Necropolis? with Judge Death? That was pretty good.

This, however, wasn't. It starts off with someone killing pro-democracy citizens of Mega-City One, and while Dredd isn't the biggest fan of democracy, he also doesn't like people breaking the law, so he goes after him.

Now, from the title you can probably guess that something fishy is going on with this killer, he's being told to kill these people by the Chief Judge. And I guess that's where my problem with this arises, I have no idea who any of the Judges that aren't Dredd are. There's a bunch of other Judges in this comic, and, presumbly, I'm supposed to know who at least some of them are? I know Dredd is an ongoing series, and has continuity, but I think this is only the second Dredd story from the last decade that I've read, so I really don't know. Is this in character for the Chief Judge? Iunno.

Anyway, there's some other stuff, and the prison's just outside of Mega-City One show up again (I last saw them in the most recent issue of 2000ad that I read), and it seems that those scenes are moving some larger plot forward.

There's also a kind of bizarre bit which seems retconned in. Maybe it was the intention from the beginning, but the killer suddenly having cockroach DNA just seems utterly ridiculous.

Meanwhile, in the art department, Colin MacNeil does a really good job on his part. 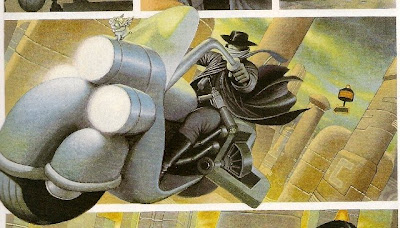 It's a bit static, and thus doesn't show movement/action that well, but that's frequently a problem with painted art. I think it looks pretty awesome. Maybe I should have bought that Devlin Waugh trade he did the art for. 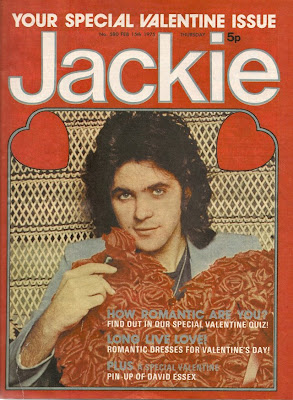 Earlier this year the Guardian newspaper gave away reprints of old comics published by IPC.

I used to read some of the comics they published back when I was a kid living in the UK, though, needless to say, I didn't read this one. Both because I wasn't born when it came out, and because it is for girls. Ick.

In fact Jackie is hardly a comic at all. There's only about six pages of actual comics in the whole thing. The rest of it is letters, short stories, agony aunts, pop star things, and other stuff that makes me glad I was not a girl who grew up reading something like this. Aiee.

The comics that are featured are both weeeeeeeeeeeird. The first one is all about how awesome and dreamy Donny Osmond is, though it features some nice art when it's not trying to replicate celebrities. 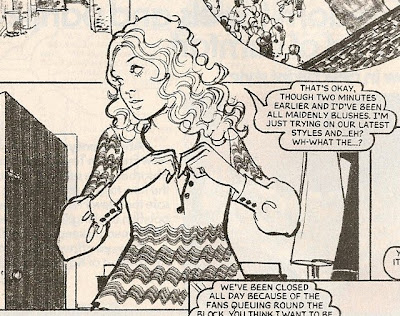 The second one is even worse, and all about a girl trying to steal her best friend's boyfriend, leading to her friend's death. What a dick! Girls!

Jackie is strange, and I hope to never read it again. It does let me show this video though, which is pretty ace, and I feel a pretty accurate representation of this magazine.